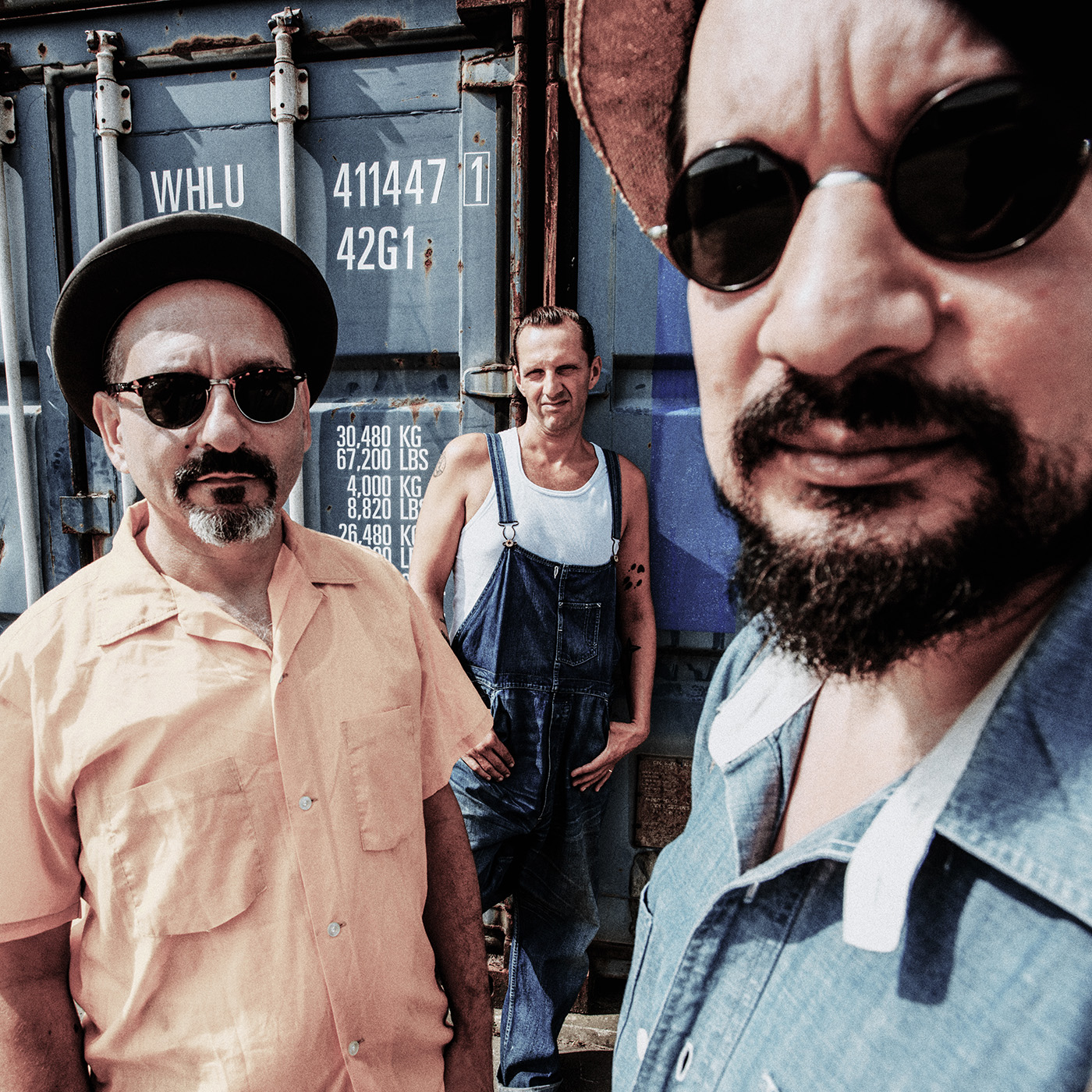 Alternative rootsrocktrio T-99 (Amsterdam, The Netherlands) have belonged to the top of the European roots scene for twenty years now. With their eclectic mix of rock ‘n’ roll, blues, country, surf, and soul they have toured all over Europe since 1999. T-99 consists of three wild bohemian characters playing on vintage instruments with enormous energy, great musicianship and a high dose of passion, thus creating a unique blend of musical styles that can only be defined as ‘that T-99 sound’ (just imagine Dr. John jamming with Los Lobos in a packed sweaty garage just outside of Austin, Texas). “The most exciting and renewing roots band in the Netherlands and far beyond." (OOR Magazine)

That’s right friends, after two years of waiting T-99 is going to hit the road hard this spring. Although the band will be less frequent on stage after the tour, after 2 years of waiting they will burn more devilishly than ever before.

Yessssss, we’re back and so are you. In October you will find us gigging in a mini tour with Kikofest as a highlight. Get your tix now and let’s celebrate we survived this shitstorm! It will be good to see you back.

We are happy to announce that the big anniversary party at Paradiso is sold out! Congrats to the lucky ones that scored a ticket. Sorry to those who could not. Check our show schedule for upcoming shows in your area.

Yowza! On the 29th of december we will celebrate our 20th anniversary in Paradiso in Amsterdam. We will bring a bunch of good friends and colleagues to join us on stage. Visit for more info and tickets the Paradiso website.

It’s here. It’s alive. Our new single ‘Bewildered/Sledgehammer’ is available as a 45 and in digital form on most platforms.

This year it is 20 years ago that T-99 saw the light. We are gonna celebrate this in Paradiso on the 29th of december with many (inter)national guests and friends. Get your tickets now! https://www.paradiso.nl/nl/programma/t-99-anniversary-party/66859/

And we will tour the Netherlands this fall and winter frequently. Check the dates section on this website: http://www.t-99.com/#shows

Heads up friends, you can pre-order now!

On September 4th our brand new 45 will hit the streets. For this release we teamed up with chief Pablo Van de Poel from DeWolff who helped us with producing, tracking and mixing at his Electrosaurus Southern Sound Studio. We had a blast! Single Series volume 2 will bring you the freshly composed ‘Bewildered’ and our rendition of Peter Gabriel’s 90ies hit song ‘Sledgehammer’.

You don’t have to wait until the record stores have their supplies. You can simply pre-order now and have it delivered at your door.

How to order? Just send an email to our friends at Sonic Rendezvous at: T-99@sonic.nl and mention which volume you want (Single Series #2 or #1).

The song ‘Back To You’ has been used in the US series Seal Team.

It’s a fact. It’s here. Watch, listen and enjoy by scrolling down to our media section and hit that button!

Oh Yes! On September 5, the new vinyl single “Try It / Tin Grin” will be released. The first from the exclusive “T-99 Single Series” comes in a hand-numbered, limited edition of 250 copies.

If you want to be sure to get hold of a copy, order now through our friends at Sonic Rendezvous. The single is 10 euro’s for NL and 11.50 for a delivery address in other EU countries. Other territories upon request. You can pay with PayPal or with advance bankpayment.

You can order the single by sending an email to T-99@Sonic.nl and you will soon receive a message with further instructions.
On 5 September, the release of “Try It” is also digitally available on all known streaming platforms and download stores. (Note: the B-side “Tin Grin” is currently only to be found on the vinyl version).

Something to look forward to dear friends! A new single will be released on September 5th. It is the first in a series called the “T-99 Single Series” that will appear in collaboration with Sonic Rendezvous. The single will be released as 7” vinyl single and partially on all known streaming and download platforms. Soon more news about this joyous fact! Stay tuned folks!

What are they building in there....

Stay tuned folks, some fun stuff is coming up soon!

Happy New Year everyone! Looking back we had a fantastic year, a brand new album, great shows and we made some new friends around the globe. Yowza! Thank you all for your unbridled support.

2018 started great for us when we played at our second home Pacific Parc on New Years Eve. The house was packed. Two days later we did a show at Paradiso with our buddies of Giant Tiger Hooch. See more pictures by photographer Hans Schoo at his Facebook page: here

This coming year we will have some cool surprises for you all, stay tuned and see you soon!

We are happy to announce that the new music video of the song ‘Medicine’ is online. This song is taken from our latest album “Bedlam!”

Time flies when having fun! Hard to believe that coming Saturday is the last club show of the Bedlam! tour. Of course you can find us on festival stages a whole summer long but a club show is something else! Saturday, May 13, 8.30 PM @ Paradox, Tilburg. Tickets can be purchased here.

Support your local record store! And us. Come see T-99 play at Record Store Day! The band will star at these locations:

Photographer André Dieterman followed T-99 for twelve hours and made a reportage. A raw, honest and beautiful impression of a day on the road of the band. See here: http://dieterman.com/portfolio/t-99-on-tour/

We are happy to announce that T-99 will be playing Scumbash festival on March 4th in Rotterdam. This annual festival delivers cream of the crop in Rock ‘n Roll, Trash, Punk, Blues and Roots music. Other names on the impressive bill are Zeke, Nekromatix, Batmobile, The Monsters, Death Alley and many many more!

On June 17th we will be playing Mañana Mañana! A cool relaxed festival in the south of Holland where you can find us with great bands like The Boogie Beasts, Dawn Brothers, Grand East and Shaking Godspeed.

While the tour is in full swing, great reviews are still coming in.

FOK.NL wrote this nice review of “Bedlam!” (in Dutch). And also The Soul Of A Clown gave the album some serious credits.

A recent live review by 3V12 who were present at the show in Metropool, Hengelo can be found here.

★★★★ Dagblad van het Noorden: “In the Netherlands there is no roots rock band that can match this trio of international stature…”

★★★★ Music Maker: “T-99 is able to distinguish itself from the numerous other rootsy rumble rock bands…”

Platomania: “This record brings you into ecstasy…”

“BEDLAM!” is out now and available in the record stores or downloadable at all the major platforms!

Happy releaseday! The new single and video for has arrived! Watch here!

‘Motorcycle Years’ is taken from the album ‘Bedlam!’ that will be in stores 3 November 2016 on Goomah Music.
Download single from Itunes: goo.gl/WrhnsF
or Google Play: goo.gl/d3DUJk

Kaboom! Your favorite three barrel roots tank is coming back! With a new album and a new tour. This fall. It’s Crazy!

After the break in 2009 the band reentered the scene in 2015 with the compilation album “The Various Sounds Of T-99” on Excelsior Recordings. The supported tour lead to several sold out clubshows and packed festivals.

The last months the band worked on new recordings and it is almost time to share it with the world. “Bedlam!”, the first studio album since 9 years will be released November 3d on Goomah Music.

Welcome to T-99’s new website! The old one was great but could only be visited if you had a computer from 1959 or earlier. Thanks to Moker Ontwerp & Atelier Tackenco we are ready for the future.

Throughout the years T-99 have shown themselves a constant factor on (pop) festivals and stages across Holland, Belgium, Germany, France, Switzerland, Austria, Great Britain and the US. The band has played (among many, many other stages) at Noorderslag, North Sea Jazz Festival, Latitude (UK), Popkomm (DE), Belgium Rhythm & Blues Festival (BE), Zwarte Cross and Eurosonic. The band shared en passant stages with legends such as Chuck Berry, Dr. John and Little Feat. Music by T-99 was used in several TV-shows and programs and the trio has done several other successful performances on national radio and tv. In 2008 the band was invited by BBC radio DJ Mark Lamarr to record exclusively at the London BBC studio’s for his popular radio show ‘God’s Jukebox’. In 2010 the band shone in theater production The Freak. And two years later their music was also used to provide power and punch to the movie Black Out and more recently in Netflix-series SealTeam.

After their stunning debut (Coo-Coo, 2001), they released their ‘voodoo-album’ Strange Things Happen (2004), that was followed by a ‘rootsy psychedelic’ album, ‘Cherrystone Park‘ in 2005. With Vagabonds (2007) T-99 created their ‘dirty down and out’ masterpiece. After a break to partake in several side-projects (Cuban Heels, Maison Du Malheur) in 2015 they issued their ‘best of’ entitled ‘The Various Sounds Of T-99’. But with these five albums and one EP (Strange Cherries, 2006) under their belt, T-99 were far from satisfied. In 2016 they released ’Bedlam!’ -one of their most outrageous albums so far. In 2018 the band started releasing 7” vinyl singles under the title “The T-99 Single Series”.